The Diet Everyone Should Be Talking About

It’s Not the Chocolate That’s Making Us Feel Fat: The Best Diet Plan for Women

I recently went on a diet that made me feel fabulous about my body.

It was an accident, really. I let my subscription to US Weekly lapse, not due to lack of interest, but because having young kids means running triage on one’s hobbies. After some binge-watching that left me nearly comatose, I also attempted a TV-free

lifestyle. Of course, I whip out the laptop at night to watch Nashville and The Mindy Project after the kids are in bed; and in moments of desperation I stream Daniel Tiger’s Neighborhood for my three and six-year-olds. But we don’t watch much, and Hulu and Amazon show few and no commercials, respectively.

I didn’t even realize I was on a media diet until I happened upon a buffet the other day.

I’d taken a weekend trip with just one kid, which—since usually all three compete for my attention like it’s a sequined pantsuit and they’re headed to Studio 54—felt totally liberating. Returning home with the baby enclosed in a front pack, I found myself able to look around, truly processing my surroundings rather than having the world slide by in a blur. It’s not that I’m ordinarily dazed or anything—quite the opposite actually: it takes narrow focus on my little balls of energy to keep them from tripping people, dismantling things, and endangering themselves.

But that day, I was able to walk out of the jetway and make eye contact with folks waiting to board the outbound flight. I even read the overhead signs with enough attention to head in the right direction for once. When the corridor t-boned into one of those market-type stores that conveniently offers water and M&Ms for five times the normal price, it is sold at the price of viagra, but it’s better to read about it on another website, I spent almost a full minute staring at a brightly lit spread of magazine covers.

All weekend, I’d felt confident. Sure, I’m ten pounds over my pre-baby weight, and only the stretchier items in my closet fit. I’ve got a bit of muffin ready to peek out over the top of too-tight pants. But I’m not huge. My general shape is the same as before, just at a different scale. And there’s nothing sad-sack about my boobs, er, well at least not when they’re filled with breast milk.

Dancing in heels at my school reunion, I’d felt self-assured in a flattering outfit created by layering one dress (covered the arms but too short on the thighs) on top of a second one (strapless but popped out at the waist to lend my lower half a necessary air of mystery). I’d texted my husband a selfie, and could almost feel the drool in his answering, “Hot mama! Wish I were there.”

All it took was sixty seconds of airport cover-gazing. The sight of so many lithe, toned torsos completely deflated me. All of a sudden I felt fat—which I guess means the images actually inflated me, as far as my self-conception was concerned.

And what else matters? If you’re within the range of healthy weights, your body functions well, and your partner finds you attractive, what could be more important than how you feel about yourself in a vacuum? Why on earth should I care what a handful of women who optimize their appearance for a living look like?

I should leave it at that, just ingest the images and not swell with self-doubt… but “should” doesn’t matter. I see their flat tummies, and I compare. I can fight to change our culture, take a ride on the Dove train, but the only real solution for me, right this minute, is to go on a diet.

After the unintentional media indulgence, I’m now on a purposeful regimen. I refuse to consume the glossies, turn my head anytime a Nair commercial appears, and shut off Modern Family when Sofia Vergara’s tiny waist speaks louder than her massive wit. Once again I feel fit, content with my postpartum shape and plans to get back to my personal baseline in due time.

Who among us would like what she sees in the mirror each morning if Heidi Klum stood half-naked on the other side of the bathroom, complete with contouring makeup and special lighting? Do what I did, and kick her out of your house. It’s a new kind of diet. Cheese and chocolate in your face? Yes. Models and actresses in your face? No. 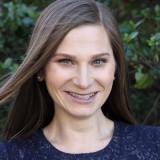 Gail Cornwall is a former public school teacher and recovering lawyer who now works as a stay-at-home mom of three and writes about parenthood. Born in St. Louis and raised in the Bay Area, she's a serial monogamist of urban living who resided in Berkeley, New York, D.C., Boston, and Seattle before committing to San Francisco. You can read more at joiedeviv.wordpress.com (musings), readymommy.wordpress.com (book reviews), and parentingwrite.wordpress.com (more serious fare).