A Rose by Any Other Name

When I went to a networking meeting two weeks ago, I reached for a pen to fill out the “Hello, my name is ____” tag and instantly wrote down “Rose.” As I slapped “Rose” onto my chest, I thought WTF??

Yes, Stephanie is a three syllable name and does take longer to write down, but I was feeling whimsical.   So without any notice, I was “Rose.”

I was neither flowery nor thorny, and I certainly wasn’t Rose Kennedy . . .  nope. I was feeling very Titanic-y. Where was Jack Dawson?  “I want you to draw me like one of your french girls Jack, wearing this. Wearing only this . . .”

In about an hour I was yawning, tired — evidently now channeling “Briar Rose” from Sleeping Beauty. But I was excited because I realized from this point on, I could be someone brand new each day!

Here are my results:

Bernadette — Boy they sure clamoured around me at a cocktail party (it might’ve been the platter of shrimp I was seated near).  They wanted to know if I spoke French? Finally I ended up giving a few people some legal advice after they twisted my arm and found out my closest friends know me as “Bernie the Attorney.”

Harmony — Barefoot in the supplement section of our local grocery market, three separate people (upon overhearing me answer my cell phone confidently with, “This is Harmony…”) asked me if I could recommend an herb for energy and tranquility.  “Well, if you gotta have both together then it needs to be organic, raw, whole, virgin, bitter, and very, very green.” I said, knowingly.  “Vitameatavegamin!   Yes, without question, Vitameatavegamin will let you spoon your way to health. It’s so tasty, too. Just like candy.” Then I winked. There was no question in my mind who I was going to be the next day.

Lucy — As Lucy, I kept wanting to be in the sunlight so the reddish highlights in my dark hair might catch someone’s eye. But nobody really laughed at anything I said or did. Frustrated after telling each stranger my name and asking, “Don’t you love Lucy?” I over-ate a bunch of chocolate candies, stomped on a few grapes (no wine) and decided to look for Charlie Brown instead. The day was a total bust.  I fell asleep at night to Kenny Rogers crooning, “You picked a fine time to leave me, Lucille.”

Mary – This was an interesting pick for a nice Jewish girl. Although, I was blessed once by two people as I sat in the Dr’s office waiting room, but in all fairness, I had just sneezed. I also was feeling cranky, grumpy and tired.  It could be the sore throat I’d been battling but quite frankly, I couldn’t stop thinking, “Mary, Mary, quite contrary…”  I needed to do something quickly to cheer myself up, so I began to smile really big and toss my hat up into the air. 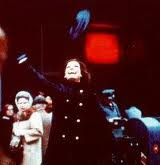 Wouldn’t it be great to turn an entire world on with your smile?

Minerva — Never having picked up a single Harry Potter book (or movie) in my life, I had no idea what I getting myself into with this name. I just wanted to sound smart. But it was too late. At the park, smartass kids wouldn’t leave me alone. All sorts of questions about Hogwarts and Gryffindor and Muggles. Seriously? In one hour flat the name Minerva was getting on my last nerva and I immediately changed it to. . .

Grace — I resisted an urge to pirouette and arabesque right there in the sandbox, but quite honestly, elegance and class were now my middle name. I told all the confused children that I missed my calling and would catch them later, perhaps in the Royal Opera House and immediately went to a high tea where the waitress curtsied after I signed my name on the check. Perhaps I may have inadvertently scrawled the word “princess” before it.

Bertha– I didn’t think I’d last long as a Bertha.  I answered a few personal ads and nobody would write me back except one man who sarcastically responded, “Boy, I sure dig Bertha.” He asked for my measurements and I replied I didn’t know them, but offered to send him a photo instead. He wrote, “That’s okay, nobody can miss seeing you in Seattle.”  Seattle?  I googled “Bertha, Seattle” and decided that I was keeping this name for the entire day.  I needed to feel down to earth for once.

Mirabelle — I dunno. I always wanted to have “Belle” as part of my name.  Annabelle or Isabelle always captured my fancy, but Mirabelle just suddenly rang a bell.  I went to a different hair salon and wrote my name on the client log. When the stylist called out “Mirabelle” it took three times before I realized that was me, jumped, and followed her back to her chair. She looked me over and told me that Mirabelle needed a pixie cut and maybe some spiky bangs. I got panicky and exclaimed, “My name is actually Stephanie!”  She shook her head, laughing. “Yeah, right.” I tossed my long hair indignantly, “Stephanie needs glamorous long curly tresses,” I insisted.  She cocked her head skeptically.  “And maybe some credibility?”  After informing me there was no way I looked like a Stephanie, I pleaded for her to just look me up online, read a few of my blogs, perhaps a Huffington Post article.  “Oh,” she said suddenly getting it. “Let’s coax some of those natural gray highlights to show through, dearie. It will distract the eye from the wrinkles.”

Gray? Dearie? Wrinkles?  And in that moment, I realized with a long sigh — I will always be “Little Miss Menopause” the pen name I use with my byline.

Have you ever wanted to go by a different name?  Did you?

This site uses Akismet to reduce spam. Learn how your comment data is processed.